No doubt the Italian in me reigns over my soul. But on cold, rainy days, my belly craves the almost poetic comfort from the simple, hearty foods common to both my Slavic and Germanic roots. Foods like pumpernickel bread, toasted to the perfect point of caramelization. Or spring radishes just developing a bit of a bite. Thick sour cream. New chives poking their heads up from the garden. And of course, eggs with yolks so orange they remind me that warmer days filled with

When the Russian ballerina, Anna Pavlova, toured Australia and New Zealand in the 1920s, a dessert was created in her honor. Looking a bit like a ballerina’s tutu, a pavlova is simply a giant meringue that is usually topped with fruit and whipped cream. I added cocoa to the meringue and topped it with whipped cream. Then, I gilded it with black cherry compote and drizzled it with dark chocolate. This fairy tale of a cake is decadent yet light…kind of like a ballerina! Ther

Vanilla Custard topped with fresh chopped mango, toasted almonds, and Merlot-infused sea salt This is a great recipe to have in your back pocket. It’s delicious on its own but it’s also a versatile base for many other desserts. I adapted this from my grandma’s original recipe. Because it uses flour as a thickening agent, I cook this on low heat, stirring the entire time. While you can crank the heat and have it thicken up quickly, your custard will taste like flour. When

I absolutely love this pasta. I eat it once a week for breakfast. I’m not going to lie, one week I even ate it three days in a row! What makes it so good? It’s incredibly simple to make. It fills me up and keeps me going for hours. But more than that, it’s garlicky, spicy, a bit salty, and absolutely luscious. Because I make this so often just for myself, you’ll find the recipe with two variations: one generous serving and family style (6 servings). If this dish seems to

A frittata is Italy’s version of the quiche—minus the crust. I didn’t grow up eating frittata but I began making them when I was first married and my husband bought me a cookbooklet for vegetarians that featured a potato, asparagus, and tomato frittata on the cover. I followed that recipe for frittata only once but then I made it my own. I omitted the asparagus entirely because it made the entire dish bitter. I began using fresh potatoes instead of the frozen hash browns t

At its core, Shepherd’s Pie (or Cottage Pie as it was originally called) is a basic, hearty dish of meat and gravy that is topped with a mountain of mashed potatoes. It’s Celtic comfort food at its best. I make two versions of Shepherd’s Pie: a vegetarian one and another with beef and lamb. I also top the pies not just with mashed potatoes but with my take on colcannon. Traditionally, colcannon is mashed potatoes mixed with boiled kale and leeks that have been stewed in mi

Just when you think you've gotten a hang of the vegetarian thing, you'll come across a recipe that requires a few splashes of deliciously tangy but difficult to pronounce Worcestershire sauce. No big deal, you think, until you read the fine print and discover that Worcestershire contains anchovies! It's fish sauce. A really tasty fish sauce, but fish sauce nonetheless. Worcestershire sauce probably has its roots in ancient Rome (or in 17th century Europe--it depends on who 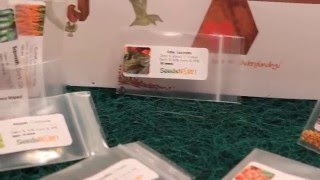 This is what happens when I just want to make myself laugh and sell non-GMO, heirloom seeds! Visit T. Rex & the Rabbit Foods, LLC's affiliate page on SeedsNow.com to buy your seeds today! Save $5 on your next SeedsNow order of $30! Use Promo Code XHDJG5SN Rawr! #nonGMO #heirloomseeds #SeedsNow #FoodfromtheGroundUp #gardening

Peas and oregano; peas and shallots; shallots and cheese; soft cheese and lemon; lemon and oregano…for such a simple dish, this bruschetta draws its inspiration from several natural pairings that when combined together work really well. This hearty yet surprisingly delicate bruschetta would be a great first course for a springtime lunch or a delicious dinner for one. I like this with a glass of Cabernet Sauvignon or Pinot Grigio. 8 slices (about 1” thick) of ciabatta lunga

March 8th is International Women's Day. For over 100 years, events honoring the empowerment and rights of women have been held all around the world. Some events are quite serious while others are joyous occasions where women of all ages can connect and celebrate their shared womanhood. When I lived in Italy, women celebrated this Festa delle Donne by enjoying food, drink, dancing, chocolates, and watching male strippers. They were honored with sprigs of yellow mimosa flow
{"items":["5ca65119512c1b0014bcf30c","5ca65119a224a60015951197","5ca65119e0f0930015c2a5a7","5ca65119a224a60015951198","5ca65119a0e0e80015db83eb","5ca65119e838c500157cd15c","5ca6511abf95df0016bdd4b6","5ca65119e0f0930015c2a5a6","5ca6511901969d0015658ee2","5ca65119512c1b0014bcf30d"],"styles":{"galleryType":"Columns","groupSize":1,"showArrows":true,"cubeImages":true,"cubeType":"fill","cubeRatio":1.3333333333333333,"isVertical":true,"gallerySize":30,"collageAmount":0,"collageDensity":0,"groupTypes":"1","oneRow":false,"imageMargin":32,"galleryMargin":0,"scatter":0,"rotatingScatter":"","chooseBestGroup":true,"smartCrop":false,"hasThumbnails":false,"enableScroll":true,"isGrid":true,"isSlider":false,"isColumns":false,"isSlideshow":false,"cropOnlyFill":false,"fixedColumns":1,"enableInfiniteScroll":true,"isRTL":false,"minItemSize":50,"rotatingGroupTypes":"","rotatingCropRatios":"","columnWidths":"","gallerySliderImageRatio":1.7777777777777777,"numberOfImagesPerRow":1,"numberOfImagesPerCol":1,"groupsPerStrip":0,"borderRadius":0,"boxShadow":0,"gridStyle":1,"mobilePanorama":false,"placeGroupsLtr":true,"viewMode":"preview","thumbnailSpacings":4,"galleryThumbnailsAlignment":"bottom","isMasonry":false,"isAutoSlideshow":false,"slideshowLoop":false,"autoSlideshowInterval":4,"bottomInfoHeight":0,"titlePlacement":"SHOW_ON_THE_RIGHT","galleryTextAlign":"center","scrollSnap":false,"itemClick":"nothing","fullscreen":true,"videoPlay":"hover","scrollAnimation":"NO_EFFECT","slideAnimation":"SCROLL","scrollDirection":0,"scrollDuration":400,"overlayAnimation":"FADE_IN","arrowsPosition":0,"arrowsSize":23,"watermarkOpacity":40,"watermarkSize":40,"useWatermark":true,"watermarkDock":{"top":"auto","left":"auto","right":0,"bottom":0,"transform":"translate3d(0,0,0)"},"loadMoreAmount":"all","defaultShowInfoExpand":1,"allowLinkExpand":true,"expandInfoPosition":0,"allowFullscreenExpand":true,"fullscreenLoop":false,"galleryAlignExpand":"left","addToCartBorderWidth":1,"addToCartButtonText":"","slideshowInfoSize":200,"playButtonForAutoSlideShow":false,"allowSlideshowCounter":false,"hoveringBehaviour":"NEVER_SHOW","thumbnailSize":120,"magicLayoutSeed":1,"imageHoverAnimation":"NO_EFFECT","imagePlacementAnimation":"NO_EFFECT","calculateTextBoxWidthMode":"PERCENT","textBoxHeight":0,"textBoxWidth":200,"textBoxWidthPercent":50,"textImageSpace":10,"textBoxBorderRadius":0,"textBoxBorderWidth":0,"loadMoreButtonText":"","loadMoreButtonBorderWidth":1,"loadMoreButtonBorderRadius":0,"imageInfoType":"ATTACHED_BACKGROUND","itemBorderWidth":3,"itemBorderRadius":0,"itemEnableShadow":false,"itemShadowBlur":20,"itemShadowDirection":135,"itemShadowSize":10,"imageLoadingMode":"BLUR","expandAnimation":"NO_EFFECT","imageQuality":90,"usmToggle":false,"usm_a":0,"usm_r":0,"usm_t":0,"videoSound":false,"videoSpeed":"1","videoLoop":true,"jsonStyleParams":"","gallerySizeType":"px","gallerySizePx":670,"allowTitle":true,"allowContextMenu":true,"textsHorizontalPadding":-30,"itemBorderColor":{"themeName":"color_15","value":"rgba(73,53,8,1)"},"showVideoPlayButton":true,"galleryLayout":2,"targetItemSize":670,"selectedLayout":"2|bottom|1|fill|true|0|true","layoutsVersion":2,"selectedLayoutV2":2,"isSlideshowFont":false,"externalInfoHeight":0,"externalInfoWidth":0.5},"container":{"width":670,"galleryWidth":702,"galleryHeight":0,"scrollBase":0,"height":null}}
1
2